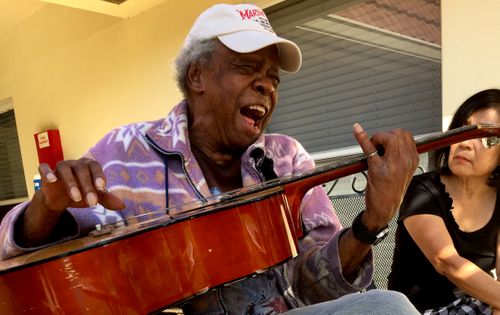 "Sterling Magee was a child prodigy and a musical genius. He was real and he was true. He loved people and they adored him. He touched many lives and brought people together. Sterling preached love and justice and fairness for all. He sang of “Freedom For My People,” and his people were those who struggled in life.
Whether telling stories about his time with Ray Charles, being band mates with King Curtis and George Benson, or talking about what he had for dinner, Sterling was unequivocally honest. You could count on that.
He was not concerned with fame or recognition. I sat with Sterling and musician George Benson, and listened as Benson called him one of the greatest guitar players he had ever known. I walked the red carpet with him when the film “Satan & Adam” premiered at the Tribeca Film Festival in New York, and I’ve sat with him many times when he played and sang just for me. He was always the same person.
Sterling lived in the present, with little interest in the past or the future. What mattered was today. He knew what he knew, and expected that same conviction from those around him. He did not like the word “believe” and did not want the word to be used in his presence. If I slipped, he’d scold me and tell me that “believe” was just a big ole word with a “lie” in the middle of it. He’d say “Don’t believe, but know what you know.” I liked that, and what I know today is that I’ll always miss one of the best friends I’ve ever had.
"